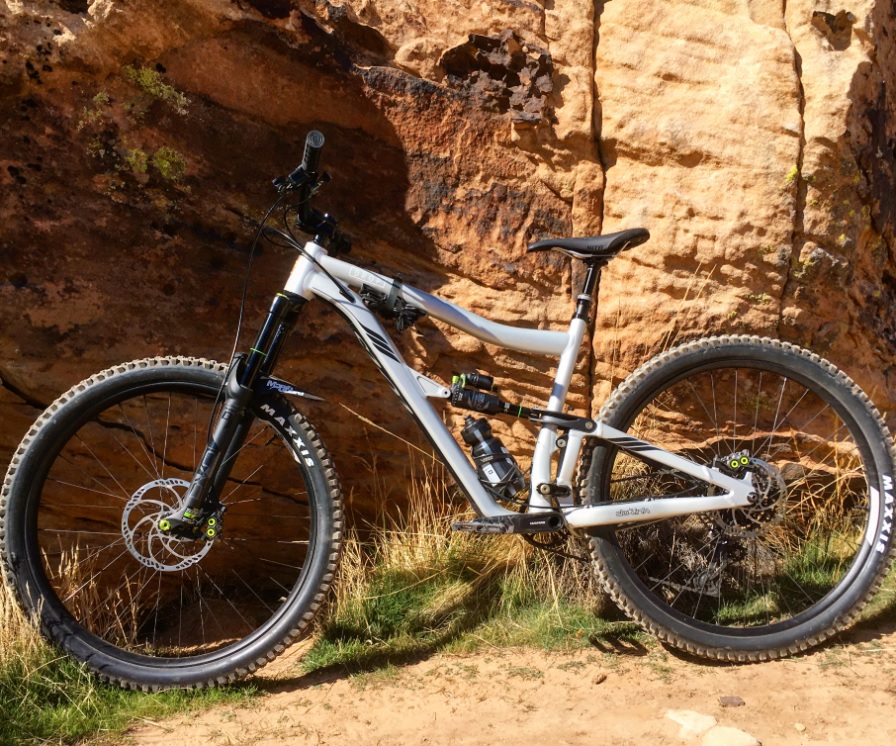 I bought my Ripmo AF NX build with the air shock late in the fall of 2019. I could not be happier with this bike! Some 29ers with 150 mm of rear travel and 160mm fork feel like monster trucks. The Ripmo AF is a bit different. While it can still handle chunk and drops and some pretty steep rooty and rocky descents, it still feels like a playful trail bike. It feels very plush off the top in that first 10-15% of it's travel and smooths out a lot of chatter and small bumps, but it has a lot of mid stroke support that allows you to pop off little bonus lines and doesn't totally dumb down the trail. You still get a lot of feedback from what is going on underneath you. This makes the bike super fun on mellower flowy trails while still being able to tackle the gnar. Through rocky sections the rear end does a good job of getting up and over the larger bumps and square edge type stuff in the deserts of St. George and Moab. Through tight stuff and corners the bike feels smaller than it really is. The Ripmo is quick to change direction through corners and moving from one side of the trail to the other but never does it feel twitchy or unstable. Climbing is amazing due the the DW link magic designed by Dave Weigel. I have never felt the need to take my rear shock out of the open setting. The Ripmo provides tons of traction during technical steep climbs and loves to chug up any smooth single track or fire road as well. You probably won't set any strava records uphill but it is super efficient and you never feel like your are losing any energy through pedaling. Don't worry that it's not carbon. The 2 lb weight penalty is hardly noticed at all. Plus metal is rad and it has welds! NX build is an amazing value for what you are getting. I have swapped my brakes over to some Magura MT7's and thanks to the awesome guys at PNW Components I am running their bachelor post with loam lever and their range stem and bar which are truly amazing! Do yourself a favor and get yourself a Ripmo AF!

Let me start by saying if you are looking to buy any bike, Jenson has been awesome to work with, and i would buy from them again without hesitation. A big thanks to Kyle for helping me out with this ride.

With that said, i'm fairly confident my local trail system is not what this bike was designed for (10 mile loop of tight, fast single track with about 850 ft of elevation), but this thing absolutely rips. Mine is about 32 lbs (size large), but it honestly feels much lighter on the trail. I'm coming from a 27 lb XC bike with a Horst link suspension, and the DW-link honestly puts the climbing abilities of my XC bike to shame. Naturally, it bombs down every descent, steep or not...once the trail starts to tilt downward, you can feel this thing picking up speed. The biggest issue i'm having is simply getting used to the significantly slacker head tube angle (i'm coming from a bike with a 69 degree HTA). The NX eagle drivetrain shifts well, although it makes some unique sounds from time to time. The guide T brakes are fantastic. I know everyone loves Shimano brakes or the SRAM Code brakes, but these Guides are a huge step up from my previous SRAM Level brakes. If you are on the fence about the DVO suspension, dont be. Its unreal. It will probably take me a year to work through the settings on the Diamond fork alone to get it truly dialed, but the thing has about 20-29 clicks of high speed compression, low speed compression, and rebound, plus it has the OTT which is pretty awesome. The topaz out back is super smooth as well. Both of which feel much more substantial than my previous Fox F29 Fit fork and Fox RP23 shock. The dropper has worked flawlessly for me so far with quick action down and up, and the Lizard Skin grips feel like fantastic. Overall, i was pretty worried getting a bike with such a huge departure from my previous ride, and with an attitude (on paper) designed for bombing hills, but this is a great bike for everything. Just like the Carbon Ripmo is highly touted as one of the best all around 29ers, i feel like the AF loses virtually none of the great characteristics that made the original Ripmo such a hit. I'm loving this thing! 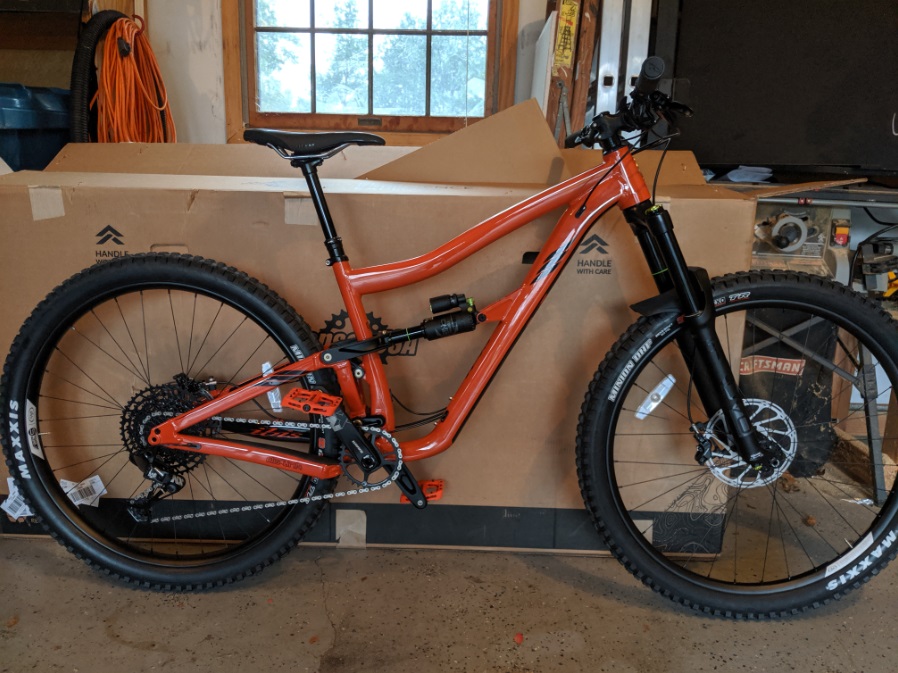 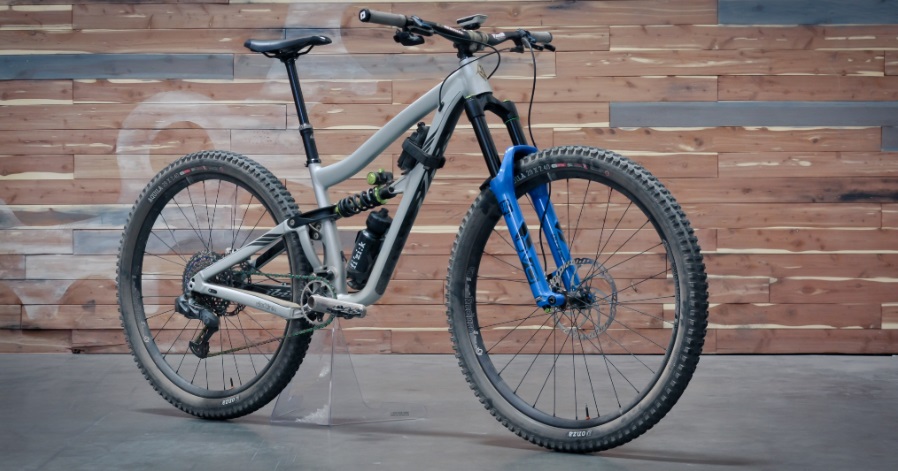 To start things off DVO and Ibis got the tune spot on! Sooooo supple and active it is amazing. I am one of the silly people who took this "budget friendly" frame and hung silly expensive parts on it because I love the fact that its aluminum! There is something comforting about an aluminum frame and hey its kinda punk rock too! Bottom line is Ibis hit a Grand Slam with this frame, geo is dialed, suspension is perfect and the price is killer! Don't hesitate if you are looking at buying a Ripmo AF frame or bike.

Bike shipped really fast and arrived at my door in a big sturdy box. Setup was a breeze: put the front wheel on, pedals, and go. One short ride in and I am in love! The bike climbs way easier than a bike like this has any right to, and pointing downhill it feels like riding a dirt bike. The weight and size, as well as the sheer speed this thing carries downhill make it different than any other bike I have ridden. The DVO suspension feels really good out of the box too. Very sensitive to small bumps as well as large bumps. Really hard to turn the HS compression on the fork though. I’ll update my review when I have more saddle time. 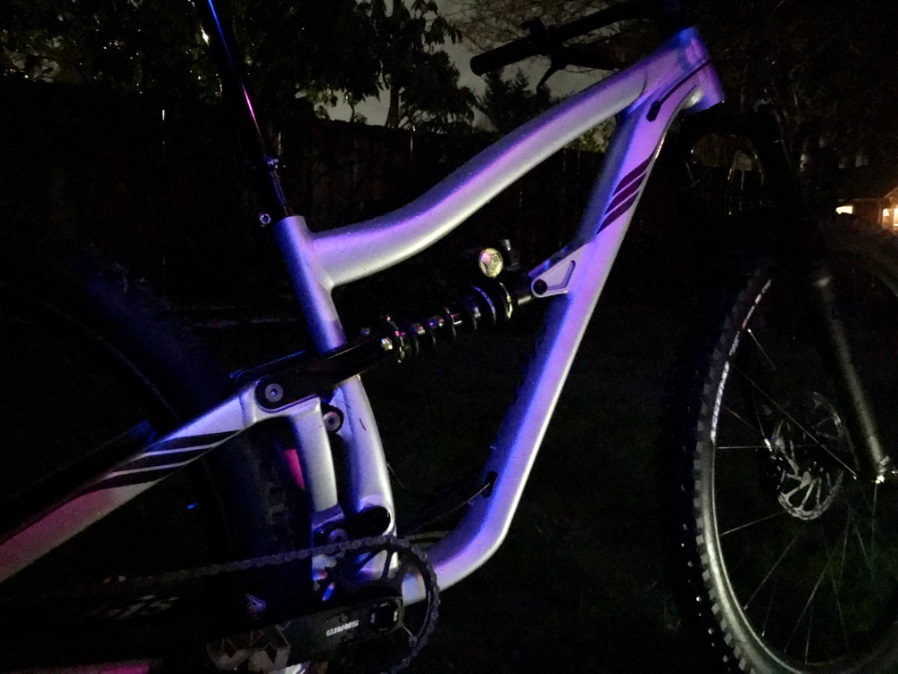 I'm coming from a Motobecane HAL 6 Pro 27.5 and I also have ridden and tried other bikes. This bike is significantly faster than the Motobecane both up and down. On my first ride I set PRs and I was riding in very poor conditions. The steep seat tube angle is really the best new trend in bikes. The DVO suspension is amazing. The bike isn't perfect but it feels pretty close. The only things that really need to be fixed is the NX eagle cassette is too heavy and the brakes could be better because the bike is so fast.

I'm usally building the lightest bike i can, carbon everything. i haven't even ridden an aluminum bike in over 10 years but this thing is amazing. mine is almost 33lbs and i don't even notice the weight. it pedals so well that i don't even ride my other bike that's almost 4lbs lighter. on the descents it's a beast. save your money and get a ripmo af.

I am totally impressed by this bike. I had Ibis before but the Ripmo is from a different planet. Excellent service from Jenson. Bike arrived fully assembled, just install front wheel and hit the road. Free 3-day shipping is hard to beat.

This is a really nice frame for the money. The build quality is excellent, especially with the DVO Jade X shock. The shock does include one of DVO's LS (light steel) springs - a very nice and unexpected upgrade. The frame also includes the optional ISCG mount. Everything built up nicely, and the internal cable routing is about as nice as it gets with aluminum frames. So far I love the ride - this bike suits Colorado front range chunky climbing and descending very well. I'm 5'9" and the medium is perfect for me.