Jenson USA carries one of the most extensive selections of curated bike gear online. We’ve developed learning guides to aid you in making informed decisions and we have backed this up with our expert Gear Advisors who are available by phone, chat, or email 7 days a week.

The frame is the backbone of a bicycle’s design. It is the structure that holds all the moving pieces together, and sets the stage for a bike’s geometry, component compatibility, and primary riding discipline. Since it is the largest and usually the heaviest part of the bike many materials have been explored to make frames lighter and stronger. Today bike frames are fabricated using an array of metals and composites. The most common materials include carbon fiber, aluminum, steel and titanium. Each material has its benefits and trade-offs that make it suitable for your riding category, budget or goals. Before breaking down the properties of those materials lets look back to Marin County, California and see the origins and evolution of those materials into mountain bike frames today. 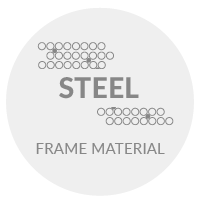 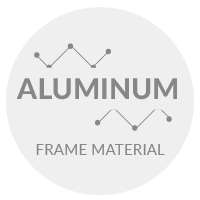 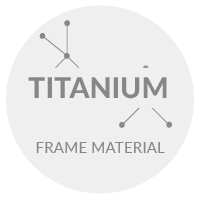 Steel was the golden child for early mountain bike frame design. It was strong, durable and had a desirable amount of natural flex. Joe Breeze, notably the fastest of the Marin County beach cruiser gang, was the first to design his own custom mountain bike in 1977. This franken-bike was built to withstand the steep and rough fire road terrain of their newfound sport. Breeze used 4130 chromoly steel tubing and called his creation “Breezer 1.”

In the early 1970s to the mid-1980s, chromoly steel was the most common material used in frame fabrication. Chromoly was the material of choice for the first mass-produced mountain bike, the Specialized Stumpjumer. Although chromoly was a great material, it was inherently heavy and thus bicycle industry raced to find lighter materials.

Around 1984, different manufactures started to produce the first aluminum frames. Aluminum was sought out because of its malleable and lightweight properties. Early aluminum frames were not popular due to their defects and visual aesthetics, but engineers saw potential in the cheap prices and lightweight qualities of the material. The cycling industries knowledge of aluminum has continually heightened since 1984. Today, aluminum is an industry leading mountain bike frame material.

While aluminum was going through its developmental paces in the 1980s, so was the exceptionally light and strong carbon fiber. Carbon fiber had its early stage durability flaws but the sheer lightness of the material has driven the weight conscious mountain bike industry to invest massively into its development. Since the early-2000s, carbon fiber has become a widely accepted and reliable material for mountain bike frames.

In the 1990’s, during the race for innovative frame materials, titanium was considered a feasible option, similar to aluminum and carbon fiber. Today it is still a progressive frame material but less common than the other metals.

The materials used in mountain bike frame manufacturing today are at their pinnacle of sophistication. Chromoly, aluminum, titanium and carbon are all going to be proficient materials for most cycling applications. They have specific distinctions that make them excel in the multitude of mountain biking applications. The following sections will breakdown the qualities of those materials so that you can make an informed selection when purchasing your next bike.

Hi-tensile and chromoly are the two main types of steel used the cycling industry. Hi-tensile is low carbon steel that is exceptionally cheap and used for low cost department store bike frames. Chromoly is a blend of chromium and molybdenum alloys. This is what quality steel mountain bike frames are fabricated with. Chromoly can be referred to as CrMo or 4130 in the cycling industry. The downfall of chromoly is its density. It is the heaviest (per cubic inch) of the four materials. Although inherently dense the development of butted tubes and alloy blends are allowing fabricators to build lighter frames of equal strength and stiffness. The advantage of chromoly is that it’s cheap, reliable and simple to fabricate frames with.

IS A STEEL FRAME RIGHT FOR YOU?

A rider who purchases a steel bike will likely value tube design, professional welds and frame longevity. They also see chromoly as a cost effective and classic material used in frame fabrication. Weight is not at the forefront of the purchase but a bike that will build memories for the next ten years is.

Aluminum is the second lightest of the materials per cubic inch behind Carbon. Today, aluminum frames are designed for an array of mountain biking’s demands. It can be fabricated into agile XC frames or built into burly DH frames where strength and durability are essential. Aluminum frames are the second stiffest in design behind carbon. Titanium and Steel can compete but the extra material and weight needed to do so usually isn’t worth the added stiffness. Because aluminum lacks in elongation, or the natural amount of stretch, designers use more material and larger diameter tubes to make the frames durable. This design process stiffens the frame but the extra material used is not a weight penalty with aluminum being so light. The cost of materials, ease to work with, and its lightweight nature make it possible for manufacturers to offer the consumer a competitively lightweight frame at an affordable cost.

IS AN ALUMINUM FRAME RIGHT FOR YOU?

Bike companies generally offer 2 to 4 different models of the same bike frame. For Example, the Giant Reign, a Trail bike, comes in a lower priced aluminum frame model and a top-of-the-line carbon fiber frame model. The use of aluminum allows the consumer to get the frame design they want at a more wallet-friendly price. The aluminum model and carbon fiber model have the same frame geometries, but the weight and quality of components may differ. If price point is the pinnacle of your purchase concerns, an aluminum frame will meet your frame geometry needs and save you some extra money to spend on higher-end components.

Carbon Fiber is in a league of its own as a frame material. It does not behave like Aluminum or Steel because it is a composite rather than a metal. A composite is a combination of fibers and epoxy. Carbon fiber or carbon for short is composed of fibrous stands woven into a grid, layered and then bonded together with an epoxy. In the construction of a carbon frame the fibrous grid is layered around a bladder mold, pressurized and then heat-treated in a separate mold while the epoxy cures. Engineers use various fiber weaves, epoxy blends and mold shapes to fabricate robust DH frames or forgiving, ultra light XC frames. Every World Cup XC racer and most World Cup DH racers will be riding carbon bikes in 2017. Carbon is the lightest of the four materials and its complexity during fabrication makes it the most expensive. The main flaw of carbon fiber is its lack of elongation or the amount of the materials natural stretch. When carbon breaks, it breaks all at once. A dent or bend is not possible with carbon like it is with steel or aluminum. With that being the main disadvantage of carbon, engineers over build frames or use unique layup patterns in high stress areas to prevent issues. Today’s carbon frames are the lightest and strongest available, and increasingly durable to withstand the rigors of riding and the inevitable crash scenarios. With carbon’s growing popularity the prices are getting more competitive and frames are populating a broader range of bike models.

IS A CARBON FIBER FRAME RIGHT FOR YOU?

The cycling industry is extremely weight conscious and places a high monetary value on lightweight carbon fiber technology. If you see the benefits in the stiffness, vibration-damping and weight savings of a carbon fiber frame, then it is the right material for you. Carbon will continue to be a relevant material used in frame construction for years to come. The benefits of a carbon frame may not be worth the extra investment for newcomers to mountain biking. The weight savings and frame stiffness may go unnoticed because the main concern will be getting a feel for mountain biking.

Alternatively, there are frames designed for the advanced enthusiast who values the carbon frame experience. With a range of component builds and various tiers of carbon fiber models, manufactures are getting their bikes to a broader expanse of riders than ever before.

Titanium is only used by a few niche mountain bike frame manufactures today. The benefits of titanium as a frame material are density, strength and elongation. This elegant material is half the weight of chromoly and has the most amount of elongation, out of the materials discussed. Titanium mountain bike frames are noted for providing a smooth, vibration damped ride. Cost and density are the flaws of titanium. Though it is the lightest of the metals, a titanium frame fabricated to be competitive in weight to carbon would be too flimsy and prone to failure to sell. Processing is other reason the material is expensive. Titanium’s strength requires advanced machining and welding methods that are more expensive than steel or aluminum. Despite being an abundant metal in the earths crust, titanium’s extraction process is intensive and another factor that drives the price up. Titanium does have a sense of elegance to it. It is a desirable material with many beneficial properties for frame construction but at the end of the day it still does not offer the lightness of carbon fiber in a weight conscious cycling industry.

IS A TITANIUM FRAME RIGHT FOR YOU?

If you are looking to ride mostly in the XC category then you will have multiple titanium frame options. For Trail bikes, options get slim, and DH bikes there are virtually none. Titanium is used primarily in XC hardtail frames. The vibration damping qualities over chattery bumps offers a forgiving ride quality for frames without rear suspension. There are manufactures that specialize in only building titanium frames. If you value using the most sophisticated metal, ride XC or light trail and are not concerned with the latest and greatest carbon frame craze, then titanium is there for you.

Now, you have a reference point in selecting the right frame material for the job. Each is uniquely different and offers a different ride quality to the next. If you choose super light carbon XC frame or an aluminum Trail frame built to get you deep in the backcountry, each material will preform as intended. After you narrow down the right frame material check out our Mountain Bike Suspension 101 article to get an understanding of another very important element when selecting a mountain bike. If you're still having trouble getting started and need an introduction to the different kind of mountain bikes, check out our How to Choose a Mountain Bike article. Ready to pull the trigger on a new frame?

We want to make sure you can go from shopping to riding as soon as possible. Our expert Gear Advisors are available to help you cater your protection setup with just the right combination of protection and comfort. Contact a Gear Advisor: 888-880-3811, Mon-Fri: 7:30am to 7pm, Sat-Sun: 9am to 5pm (PST)