Jenson USA carries one of the most extensive selections of curated bike gear online. We’ve developed learning guides to aid you in making informed decisions and we have backed this up with our expert Gear Advisors who are available by phone, chat, or email 7 days a week.

The most basic and freeing sensation felt while riding a bike is pedaling on a flat dirt surface. You felt it as a kid and you still feel it today. The gripping sound of a tire implanting tracks into the soil and the chain wrapping around the gears in a methodical symphony of grinds and rattles that sedate your mind as you pedal farther from reality. The driving force of this human powered escape is the drivetrain. The drivetrain is a group of mechanical components that allows the rider to propel him or herself forward. The most basic drivetrain is a single speed. A single speed is composed of a crankset, a chain and a smaller gear ring that is connected to the rear wheel. While pedaling, the cranks rotate the large gear ring, which circulates the chain and turns the smaller gear ring attached to the rear wheel. This cycle propels the rear wheel forward. Not to hard of a concept to grasp. The large gear ring is called a chainring. The chain is simply called a chain and the smaller gear ring mounted to the rear wheel is called a cog or freewheel. The bike you learned to ride on probably used a single speed drivetrain. Single speeds are common on an array of bikes including kids, bmx, commuters and mountain bikes.

Single speed bikes are great, simply keep the chain tight, lube it up every now and then and smoothness will continue. That is until you encounter a large hill. While your single speed drivetrain will be running smooth, your lungs and legs will not when they have to take on the hill with just one heavy gear. The world is not flat and the best parts to ride mountain bikes are usually found in areas of undulating terrain. Thus the need for interchangeable gears, shifting and all the components needed to help the mountain bikers get to the top of the mountains was created. This is the break down of how a multispeed drivetrain operates and how to select the right drivetrain for your next bike. 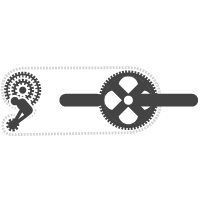 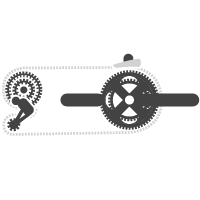 The crankset is the combination of cranks, spindle and a front chainring or chainrings. The crank arm portion of this component can vary slightly in length depending on your size. Crank arm lengths range from 165mm to around 185mm. The most common size is 170-175mm in length. Some small and extra small bikes come with 165mm length crank arms. This is to offer more pedaling clearance on bikes with a low bottom bracket height. It also provides a smaller rotating circumference for shorter legs. The longer 180 and 185mm length cranks offer a leverage advantage for longer, more powerful humans. The spindle is the cylindrical shaft that connects the right and left crank arms together. It is the piece that directly contacts the bearings in the bottom bracket and allows the cranks to spin. The spindle comes in a variety of lengths and diameters depending on what bottom bracket standard the frame uses. The next part of the crankset is the chainring or chainrings. Until the introduction of the wide range cassettes (10-12 chainrings) on mountain bikes, most cranks came equipped with 2 or 3 chainrings. The chainring sizes of a typical three-ring crankset included a 22tooth, 34tooth and 44 tooth chainrings. Customization of your three rings can vary but finding the right gear was not really a problem. The multiple chainrings allowed the rider access to a huge range of gears ratios that would suit every hill grade they encountered. The large 44 tooth ring was used for going as fast as possible on downhill terrain and the small 22 tooth chainring was used as a bailout gear at the end of the day or when you needed the easiest gear to get to the top of a difficult climb. The front chainrings were interchangeable on the fly using a front derailleur and shifter. The shifter and derailleur parts of the drivetrain will be explained in the following sections. Today more bikes are transitioning to single front chainring setups. The introduction of 11 and 12 speed cassettes has made it possible for the rider the get the needed range of gears and ditch the extra front derailleur and shifter parts. 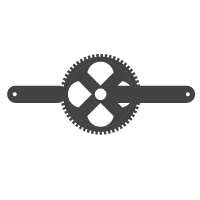 The cassette is the cluster of chainrings that is mounted to the freehub on the rear wheel. The freehub is the ratcheted engagement mechanism that allows the wheel to spin freely while coasting and engage when the rider pedals forward. The number of chainring’s in the cassette cluster defines the speed of the cassette. For example if there are ten different chainrings then it’s a ten-speed cassette. Twelve-chainrings, twelve-speed cassette, pretty easy. Today cassettes can range from 5 to 12 speeds. In a 12-speed cassette the 12th gear will have the smallest amount of teeth (Likely 9 teeth) and will be the bikes fastest gear. The cassette chainring with the largest amount of teeth, located the closest to the spokes, will be the easiest gear. The size of this ring can have up to 5O teeth and will be used on the steepest climbs or at the end of long rides when you are completely out of energy. The 12 speed cassettes are standard with a 9-tooth small ring and 50-tooth big ring. Cassette clusters in the 8-10 speed range come various tooth combinations and are usually paired with multiple front chainrings. 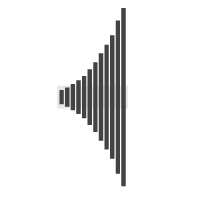 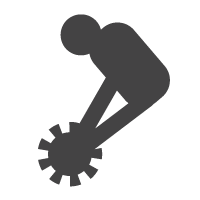 Front derailleurs look and act completely different than rear derailleurs. They do not have a retracting robotic arm and contain no moving pulleys. A front derailleur is composed of two metal plates that push the chain down or up through the chainrings on the crankset. It is designed to shift the chain between chainrings with large teeth differences. I.e. 22-tooth to a 34-tooth chainring. 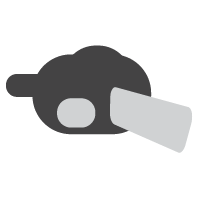 Some drivetrain systems are now using battery powered electronic shifting where button commands switch the gears rather than mechanical cables and levers. Electronic derailleurs and shifters are still only found on top tier mountain bike drivetrains. 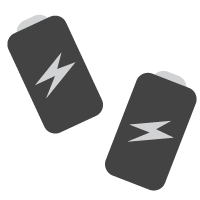 When buying a complete bike in any of the mountain bike categories you will see two main drivetrain brands, Sram and Shimano. From that point the list of drivetrain models get pretty long and confusing. XX, Zee, Deore, Eagle, XTR, GX, etc. The models all have different qualities and price ranges. It is important to do your research on the drivetrain model that will come equipped on your bike. A top of the line drivetrain will have precise shifting, be made with weight conscious materials and will have lasting performance. An economically priced drivetrain will get the job done but wont be the smoothest or shift precisely for an extended length of time. A low-grade drivetrain can be used to get the price down on an entry-level carbon complete bike. A mid or top tier drivetrain can enhance the value of an aluminum model mountain bike. Quality drivetrain components dwarf the weight savings of the carbon frame almost always. Smooth and consistent shifting over many rides will be a more noticeable value because it is something the rider will be interacting with throughout every ride.

Drivetrain selection can be an intimidating section to navigate when purchasing a new mountain bike. The research and final selection process will take some time but hopefully the end result will be a quality drivetrain that suits your ride experience requirements and personal budget. We want to make sure you can go from shopping to riding as soon as possible. Our expert Gear Advisors are available to help you cater your protection setup with just the right combination of protection and comfort. Contact a Gear Advisor: 888-880-3811, Mon-Fri: 7:30am to 7pm, Sat-Sun: 9am to 5pm (PST)